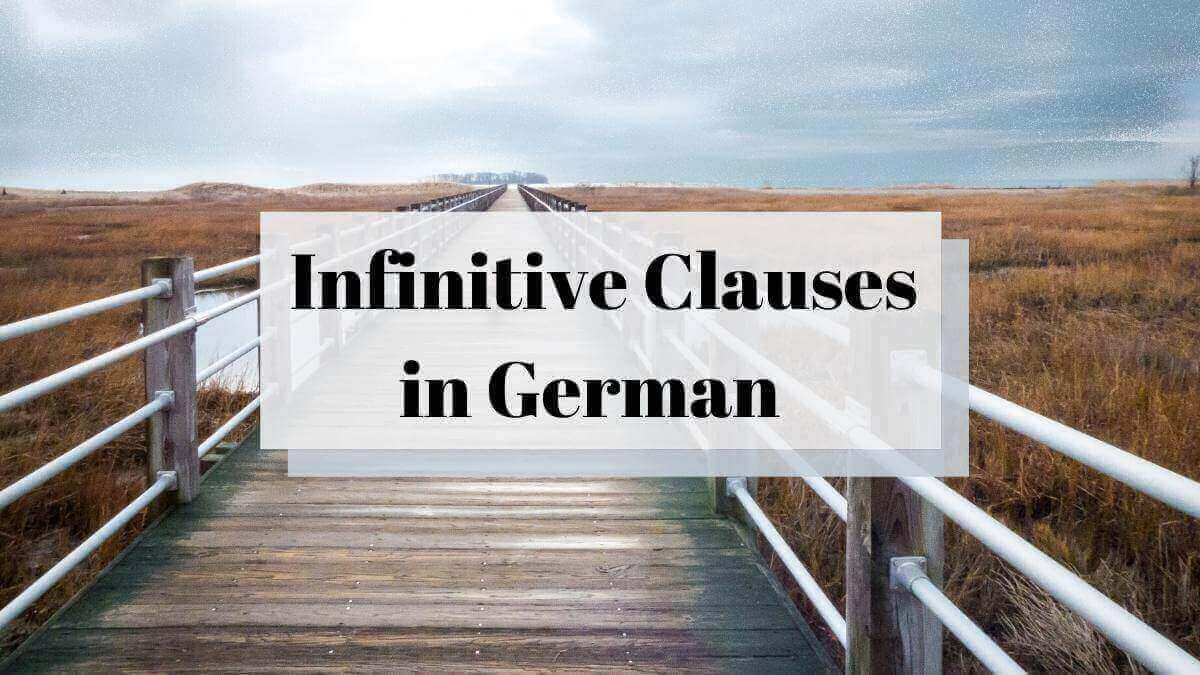 There are high chances that you have already come across infinitives, if you have been learning German for about a month. In German, different infinitive expressions are used to form sentences. Such sentences are known as “German infinitive clauses”.

When there are two verbs in a sentence, one verb is usually in the infinitive form. Before we start learning about the infinitive expressions, let’s first find out more about infinitives.

What are Infinitives in German?

By now, you all must be aware that most of the verbs end in “-en“. Some examples are lernen (to learn), singen (to sing), fahren (to drive) etc. This basic form of a verb, that means, the non-conjugated form of a verb is called the “infinitive”.

Some infinitives in German end in -eln, -ern or -ein. Examples are sammeln (to collect), erinnern (to remember), sein (to be) etc. The most common usage of infinitives is with the modal verbs. You can check out our lesson on Modal Verbs if you would like to learn more.

The second-most common usage of infinitives is with “zu“. The sentences that include infinitives with “zu“ are called as “German infinitive clauses”.

In this lesson, we will talk about the correct usage of this clause and go through some words and phrases that introduce this clause. So let’s jump into the details right away!

What are German Infinitive Clauses?

In both English and German, infinitive clauses are a type of dependent clause. You can express yourself in a more complex way with the help of this clause.

German infinitive clauses are constructed with the infinitive form of a verb and the preposition “zu“. They are applicable when you want to use “to + verb” in a sentence.

For instance, He forgot to bring his camera. As you can see, there are two verbs in this sentence – “forgot” and “to bring”. First verb is conjugated and the second verb is in its infinitive form.

Infinitive clauses with “um … zu” (in order to) indicate the purpose of an action. In this case, the infinitive clause depends on the main clause of the sentence for its meaning.

Furthermore, the expressions “ohne … zu” (without) and “anstatt … zu” (instead of) are also commonly used. There are certain verbs and phrases as well, which are usually followed by an infinitive clause. We will study about all these in the next section of the lesson.

How to Use German Infinitive Clauses in Sentences?

Just like other dependent clauses, even the infinitive clause is separated from the main clause by a comma. The word zu and the infinitive verb are placed at the end of the clause. “Zu” precedes the verb.

In case of separable verbs, “zu” is placed between the separable prefix and the verb stem.
Example:- Er hat vergessen, seine Kamera mitzubringen. (He forgot to bring his camera.)

An infinitive clause usually follows a main clause, but sometimes it can occur at the beginning of the sentence. In this scenario, the main clause begins with the verb.
Example:- Wie ein Chefkoch kochen zu können, ist schwierig. (To be able to cook like a head chef is difficult.)

However, they can refer to the object when used with certain verbs and phrases.
Example:- Ich rate dir, im Hause zu bleiben. (I am advising you to stay indoors.)

We hope you have understood how to form different kinds of sentences using just zu and infinitive form of a verb. Now, let’s learn more about infinitive expressions with um … zu.

We use “um … zu” when we want to express the purpose or intention of an action. If you can replace the “to + verb” in a sentence with “in order to + verb” then use um … zu.

Whenever you get confused whether to use zu or um … zu, always ask the question “why” to the main clause. If you get the answer in the next part of the sentence, then use “um … zu“.

List of Verbs and Phrases that Require Infinitive Clauses

Click here to have a look at all the verbs and phrases that require infinitive clauses.

If you enjoyed learning this lesson, also check out other topics on your favorite blog “All About Deutsch”.

You can also go through this tutorial on YouTube, if you wish to learn more about German Infinitive Clauses.