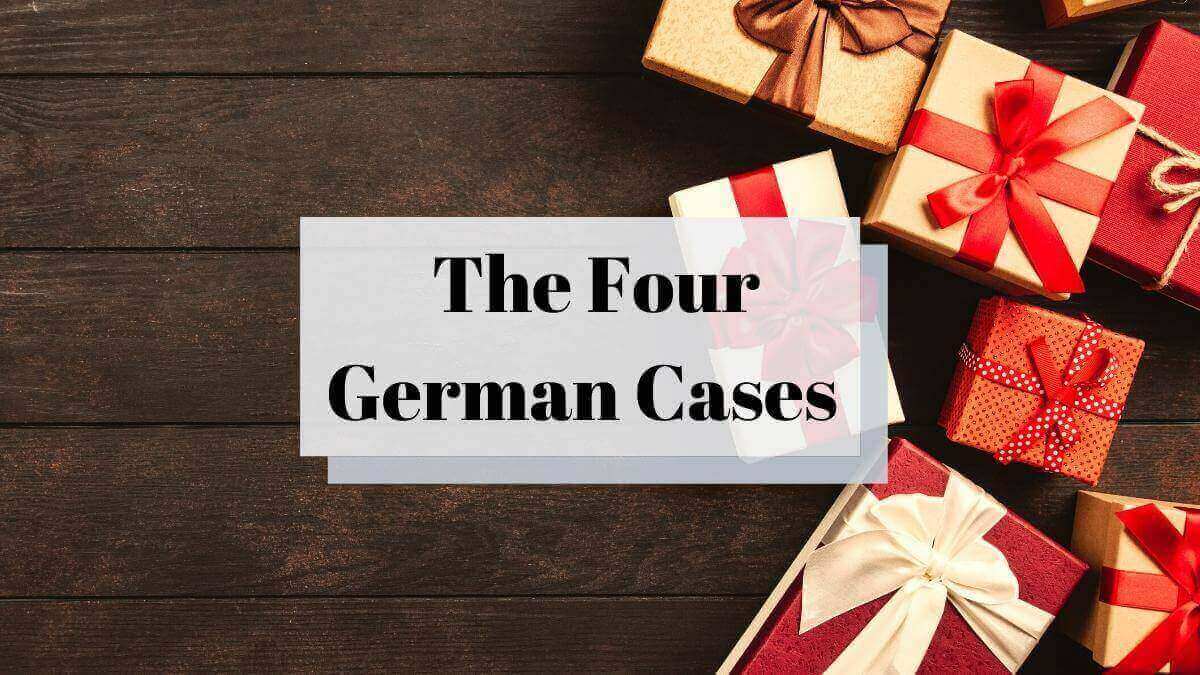 Have you been learning German for quite some time? Then, you must have surely come across the German cases. Have you noticed that the articles are written in slightly different ways in different scenarios? There are number of possibilities to translate English “the” and “a” in German. Like der, den or dem and ein, eine or einen and so on.

Not just articles, but even pronouns change and the adjectives take a variety of endings. These complications are due to four German cases. The German case system may seem difficult at first, but once you get the hang of it, you’ll be able to form sentences with ease.

It is important that you always get your German cases right, if you wish to communicate fluently. Native speakers won’t like it, if your pronouns or articles don’t match their cases.

In this lesson, you’ll learn about the 4 German cases and when to use them. So let’s jump into the details and try to understand this case system.

What are German cases

In German language, each noun, pronoun, article and adjective has four cases.

For example, er and ihn. These are the two variations of the same pronoun.

Unlike English, every German noun has a gender. The three articles der, die and das indicate the three genders- masculine, feminine and neuter respectively.

A noun’s article too changes depending on if it is the subject or object. For example, den and dem are the two variations of the same noun.

When to use which German case

The three main factors that determine which case to use are:-

There are also certain verbs which always take a specific case. This factor is covered in this lesson- Dative Verbs and Accusative Verbs. Now, let’s study the four German cases in detail.

The nominative case describes the subject of the sentence. Subject is the person or thing performing the action. It is known as der Nominativ in German.

Let’s have a look at the definite and indefinite articles in nominative case:-

The verbs sein, werden and bleiben are usually followed by a noun in the nominative case, even though it is not the subject of the sentence.

For instance, Er ist der beste Lehrer. (He is the best teacher.)

The accusative case describes the direct object of a sentence. Direct object is a person or thing that is acted upon. It is known as der Akkusativ in German.

This case answers the question “whom?” or “wen?” and “what?” or “was?”. The question is asked to the subject.

Let’s have a look at the definite and indefinite articles in accusative case:-

Only the masculine articles change in the accusative case.

There are certain verbs and prepositions that always take the accusative case. For example, the verb “haben” always requires a direct object. Most of the verbs need accusative case.

Also, the nouns or pronouns following the prepositions – bis, durch, für, ohne, gegen, um and entlang are in the accusative case.

The dative case describes the indirect object of a sentence. Indirect object is a noun that receives something (usually the direct accusative object). It is known as der Dativ in German.

Let’s have a look at the definite and indefinite articles in dative case:-

You must have noticed “+ n” in the table above. This means that an extra “-n” is added at the end of the plural forms. It is not added to the plural forms ending in “s” or “n”.

There are certain verbs and prepositions that always take the dative case. Few verbs are:-

The nouns or pronouns following the prepositions – aus, außer, bei, mit, nach, seit, von, zu and gegenüber are always in the dative case.

The genitive case is used to express belonging or possession. It is known as der Genitiv in German. This case answers the question “wessen?” or “whose?”.

Let’s have a look at the definite and indefinite articles in genitive case:-

You must have noticed “+ s” in the table above. Masculine and neuter forms take an extra “-s” or “-es” at the end. Nouns ending in -s, -ß, -x, -z and single syllable nouns take an -es ending. All the other nouns take an -s ending.

Let’s consider the last statement. Whose book is lost? – Des Kindes. The book belongs to the kid. So, the “owner” is always in the genitive case and is placed second. The noun that is owned is first, and goes in whichever case it would normally go in.

There are certain prepositions that always take the genitive case. They are as follows:-

In spoken German, you can also use von and dative case instead of genitive case. For example, Das Auto von meinem Bruder (My brother’s car).

Go through our lessons on Pronouns and Adjectives to know more about how these four German cases affect them.

Want to learn more about German cases? Check out this tutorial on Transparent Language.