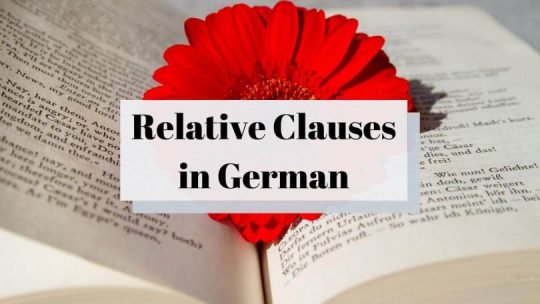 As an advanced beginner student, building basic short sentences in German is a simple task. But, at some point of time, you’ll have to take the next step and lengthen your sentences.

What are Relative Pronouns?

Relative pronouns are the words which are used to combine two sentences together. They are usually definite articles der, die and das. Just like articles, even the relative pronouns change depending on the case, gender and number of the noun.

You must be wondering how to decide which one to use. Well, it depends on the noun which was used in the first sentence. If the noun is feminine, then the relative pronoun must also be feminine.

German relative pronouns are equivalent to English “which”, “that”, “who”, “whose” etc. For example – My friend, who owns the cafe, is back in town.

You must have noticed that this table is very similar to the one with declension of definite articles. The only difference is in the dative plural and in the genitive case.

Now, let’s study how and when to use these pronouns in different sentences.

What are German Relative Clauses?

A relative clause is a type of dependent clause, which is used to join two main clauses (sentences). This clause helps you to provide additional information about the noun without a new sentence.

German relative clauses are always introduced by relative pronouns. Also, they always begin with a comma.

Such complex sentences are known as relative sentences. They are called Relativsätze in German.

While forming long sentences using relative clauses, the most important thing to remember is that the conjugated verb is always placed at the end of the relative clause.

Relative pronouns are usually placed immediately after the noun to which they refer. They can be in the middle of the sentence or at the end of the main clause. Whenever necessary, a preposition can be placed before the relative pronoun.

Lisa sucht einen Partner, der ihr bei der Hausarbeit hilft. (Lisa is looking for a partner who will help her with the housework.)

Types of Relative Clauses in German

Take this quiz on German relative clauses to practice what you learned in this tutorial.

If you enjoyed learning this lesson, also check out the topic Subordinate Clauses in German on your favorite blog “All About Deutsch”.

You can also go through this article on DW, if you wish to learn more about German Relative Clauses.