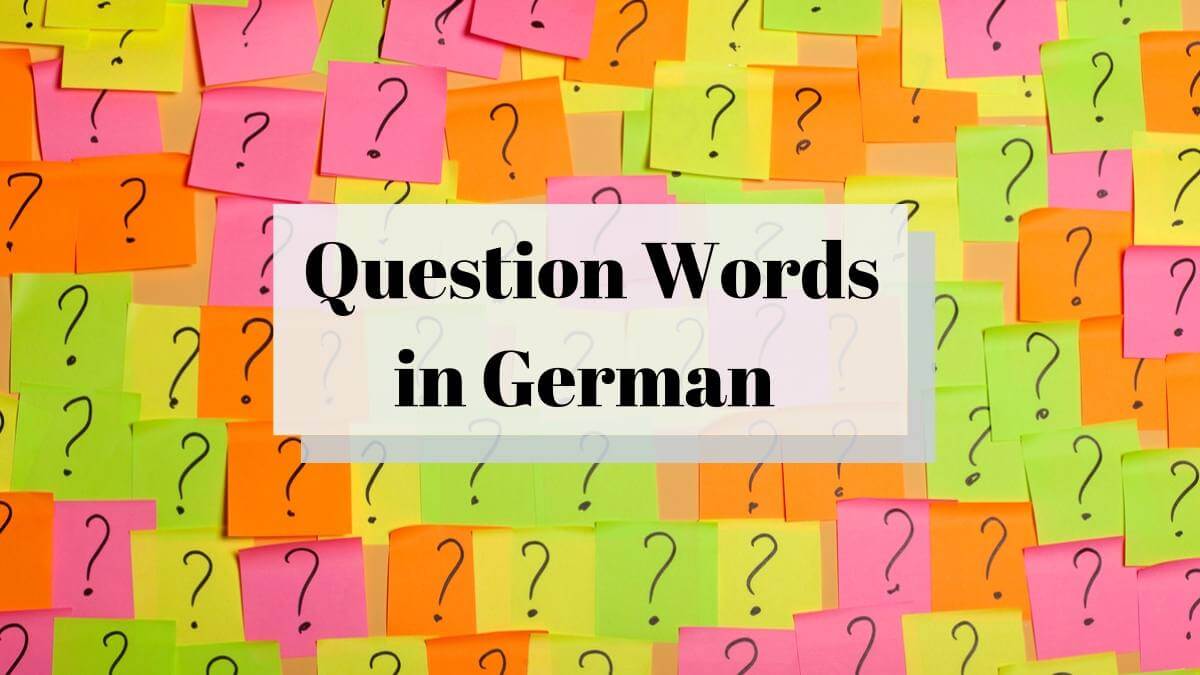 What are your hobbies? Who is your favorite actor? Where do you work? Such questions can help you get to know someone new. German question words is the key to holding a conversation longer. The more questions you ask, the faster you are going to learn about the other person.

Being able to ask some basic questions is an essential part of learning any new language. It will help you to strike conversations and avoid awkward silences. Let’s start with this lesson now!

What are German Question Words

The 9 basic German Question Words are as follows:-

As you can see in the table above, W-Fragen are called so because, all the German question words begin with the letter W. Few other commonly used question words are as follows:-

While asking questions, all the other question words remain the same, except “wer” and “welch“.

Declension of “Wer” and “Welch”

Just like masculine article der, the word wer (who) also gets declined according to the four cases.

The word welch (which) too changes depending on the case, gender and number. The declension is as follows:-

Apart from Wh- questions, there is one more way to ask questions. That is, yes-no questions. These are called so because, they can be answered with just a simple “yes” or “no”.

Now, let’s try to learn how to form sentences with these German question words.

How to Ask Questions in German

In order to form a Wh- question in German, start with the question word first. The conjugated verb takes the second position, followed by the subject of the sentence. If there is anything else in the question, then it is placed after the subject.

For example, Wann ist das Konzert? (When is the concert?) Here, the question word “wann” is first, the verb “sein” is second and the subject “Konzert” is third.

Another example – Warum kommt er immer spät? (Why does he always come late?) Here, the subject is “er“. The rest of the information “immer spät” goes at the end (after the subject).

The sentence structure in German is a bit different from other languages. So, never translate questions from your mother tongue to German.

In English, we ask – What is your name? The word “what” translates to “was” in German. However, we use the word “wie” (how) to ask the same question in German. Wie heißen Sie?

Forming yes-no questions in German is a little simpler. Start with the conjugated verb first. The subject is placed at the second position. The rest of the information follows the subject.

For example, Kommen Sie aus Berlin? (Are you from Berlin?) Here, the verb “kommen” is first, the subject “Sie” is second and the other information “aus Berlin” is at the end.

For both types of questions (yes-no and Wh), the verb is always conjugated according to the subject. Check out our lesson on Verbs if you don’t remember different kinds of verbs and how to conjugate them.

Difference between “Wo”, “Woher” and “Wohin”

You may have noticed earlier, that there are 3 ways to form questions using “where”. This question word changes depending on the context (wo/ woher/ wohin). There is no such change of the word “where” in English.

Have a look at these 3 questions:-

“Wohin” implies movement from one place to another. It means “to where”. It is used when you need to know where someone is going (to).

You have learned enough about German question words. Now, it’s time to form some simple questions using them. Here are 15 basic questions in German that you should know, if you wish to have a small introductory conversation with someone.

Use “Sie” instead of “du” during formal conversations.

Do you want to practice what you learned in the lesson? Click here to take the quiz and test your knowledge of German question words.

If you enjoyed learning this lesson, also check out the topic Imperative in German on your favorite blog “All About Deutsch”.

Want to learn more about German question words? Go through this article on The German Project.

How to Form German Comparative and Superlative Adjectives

Master the Nominative Case in German in under 2 Hours