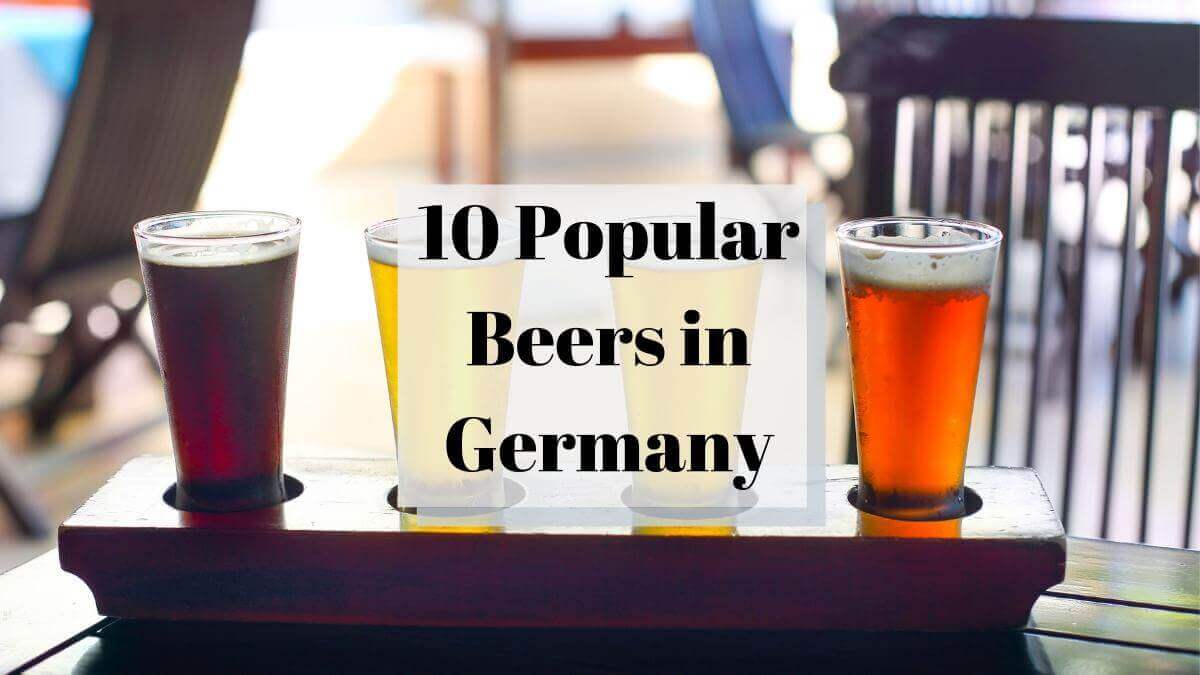 Trying popular beers in Germany when on a trip there go hand in hand. Germany has a very well-known and popular beer culture. So many people from all over the world visit the biggest beer festival known as Oktoberfest every year.

Weather you are visiting Germany as a tourist or specially to go to the Oktoberfest in Munich or any other city of Germany, here are the popular beer brands which you must know. In this article, you will come across a few German words. We have their translations sorted for you below.

Beer Dictionary for Beers in Germany

Here are 10 Popular Beers in Germany:

Erdinger is brewed by the Erdinger Weißbräu brewery. The private brewery is located in Erding in Germany and they have been brewing for over 130 years. Like many other breweries, they abide by the German Purity Law. The Bavarian brewery also offers a guided brewery tour.

Although the Erdinger Weißbier, which is their original wheat beer, is their most popular beer, they also have other products like Alkoholfrei or alcohol free, Urweisse which is a traditional Bavarian beer, Dunkel or dark beer, Kristall which is a crystal clear beer, Pikantus which is a very strong beer with an ABV of 7.3% and an original wort of 16.7°P, Leicht which is a light beer with a very low ABV of 2.8% and lesser calories and Schneeweisse which is a spicy flavored winter treat.

Paulaner originated in the Au Monastery in Munich where according to records, the beer was brewed by the Monks. Paulaner has been around as a part of the beer culture in Munich ever since 1634.

Classics of the Paulaner Brauerei München include Weißbier and Hell, whereas they specialize in Oktoberfest beer and Salvator beer as well. The Salvator beer, they say, is the father of all strong beers. They have been brewing Salvator since 375 years.

The foundation of the Staatliches Hofbräuhaus in München dates back in 1589, making it one of the oldest breweries of Munich. While the brewery was operational a little over 100 years ago in Hofbräuhaus, the brewery has now moved to the outskirts of Munich. One can also book their popular brewery tour.

The Hofbräuhaus offers a number of rooms having unique features. The “Schwemme” is a room where up to 1300 persons can be seated. The Biergarten or a beer garden can host up to 400 people. Other rooms include Bräustüberl, Festsaal or a festival hall, Münchner Zimmer or the Munich room, Wappensaal, Erkerbar which is a tavern and Erkerzimmer.

The roots of this brewery lie in 1397. Around that time, the brewery for a few decades saw several owners. In year 1807, the royal brew master Gabriel Sedlmayr acquired the Spaten Brauerei which at that time was the smallest brewery in Munich. The brewery saw a partnership with the Leist-Bräu. The Spaten-Franziskaner-Bräu was founded in 1922. The brewery was heavily destructed due to the air attacks and bombings in Munich between 1943-45.

Spaten offered their Champagner Weisse in Oktoberfest in 1964. Today, apart from Germany, Spaten is sold in the USA, Japan and western Europe. Spaten brews three beers which are Spaten Münchner Hell, Alkoholfrei and Oktoberfestbier.

Gaffel is a brewery based out of Cologne. One of the oldest breweries, the history dates back to 1803.

The most popular product from Gaffel is the Gaffel Kölsch, the traditional speciality beer from Cologne. Other products from Gaffel include Gaffel SonnenHopfen which is a mild and tangy summer pale ale. Gaffels Fassbrause is a refreshing non alcoholic drink for the health conscious folks. Apart from that, they also distill liquor.

Weisses Bräuhaus is another brewery which resides in the Bavarian region of Germany. In 1872, Georg I. Schneider was the first commoner who was given the right to brew wheat beer. Schneider was one of the wheat beer pioneers.

The classic Schneider Weisse remains to be one of the most popular assortment by them. For those who don’t prefer to have a high alcohol content, they brew the leichte Weisse. Other products include Aventinus Eisbock which is a dark beer, Nelson Sauvin 2017, helle Weisse, Kristall, Alkoholfrei, Festweisse, Hopfenweisse and Aventinus.

Diebels is the dark alternative among German premium beers and has been brewed since 1878. The place of origin to this beer is the town of Issum. In 1878, Josef Diebels founded his brewery in Issum on the Lower Rhine, thus laying the foundation for Diebels.

The most popular product is the amber colored Diebels Alt. Other products include Diebels Light which has a 40% reduced alcohol content for the calorie conscious and is an alternative beer with the real Diebels Alt flavor, Dimix is Diebels Altbier 60% mixed with 40% cola lemonade and also the Diebels Alkoholfrei.

Augustinerbräu is a brewery which was built in a Monastery just outside of Munich. The first mention of the brewery was in 1328.

Augustinerbräu is popular for its Oktoberfestbier which you can enjoy in the tents. Other products include the Lagerbier Hell, Edelstoff, Heller Bock, Dunkel, Weissbier and Pils. Maximator is their winter beer.

The name dates back to 1417 when the Hacker brewery was born. With the marriage of Theresia Hacker and Joseph Schorr in the 18th century, the Hacker Pschorr brewery was established.

The popular beers by them are Hacker Pschorr Kellerbier, Weissbier and Münchner Gold. One can enjoy their Oktoberfest special beer Hacker-Pschorr Märzen at the Hacker Festzelt or the Hacker tent.

The name Löwenbräu was first surfaced in records back in the year 1746. The brewery is located in Munich and is one of the oldest in the Bavarian region.

The brewery produces Alkoholfreies Schankbier which is a low calorie non-alcoholic draft beer, Dunkel, Original, Radler, Triumphator, Urtyp, Weisse and Perfect Draft. The brewery also has a tent in the Oktoberfest where they serve their Oktoberfestbier.

These are the most popular beers in Germany and you should definitely try some of them on your next trip.

If you enjoyed reading this article, also read about the top 10 popular beers in Austria.